I love to run. That’s no secret. I’m among the <.03% of people that actually looks forward to long runs in oppressingly hot, humid weather. I look forward to my feet pounding the pavement, the the breeze (or lack thereof) whipping through the low spots, and the feeling at the end that, though I’m lying on the ground in a pool of my own sweat, I’ve done something significant. Though, in ultimate irony, I arrive at the same place I started.

My son’s developing this love as well. When he sees me getting ready for a run, he gets ready, too. He ties his shoes on extra tightly. Gets his bottle of water squared away. And queues up the songs he wants to hear as we run.

He runs in ~.5 mile stretches. He’ll run ahead of me for a bit, taunting me as he looks back. Or he’ll run right beside me, talking about how much he loves being outside.

Then .5 mile hits, and he gets bored.

So he starts feigning exhaustion. Breathing hard. Retching his shoulders. Slowing down his words as if to catch his breath. 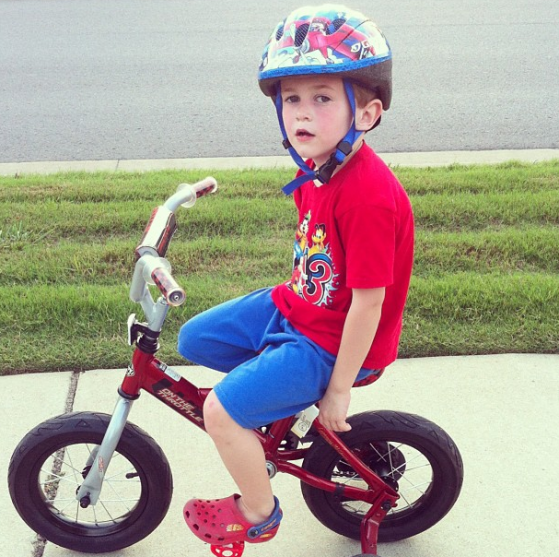 So I strap him in the stroller as we trudge out a few more miles as he jabbers on about monsters, soccer practice, and one of his new-found friends at church.

He wasn’t tired at all! He wasn’t gassed. Wasn’t sore. Wasn’t out of energy.

He just wanted to quit for a while, and he knew what it looked like when daddy was tired. So he did that.

I wonder if we do the same thing in life?

We give up because we get bored. We want something new. Different. Shiny. And what we’ve been doing…well, we’re going to feign exhaustion so we can jump back in the jogging stroller.

And let us not grow weary of doing good, for in due season we will reap, if we do not give up. So then, as we have opportunity, let us do good to everyone, and especially to those who are of the household of faith. – Paul, Galatians 6:9-10

You see what God’s called you to do. You’ve see it more clearly than you ever have.

Because you serve a God that’s bigger than others’ expectations.

You have caught a vision for who God wants you to be. You’ve seen where that idea could lead. You’ve realized who it could impact.

But it’s not shiny anymore. It’s actually kind of boring, and the new smell has worn off. It used to give us energy, but now it feels more like a job.

Obedience is found in doing the right thing, even when it doesn’t feel right. Even when it feels boring, mundane, and work-like.