A whole new level of gross 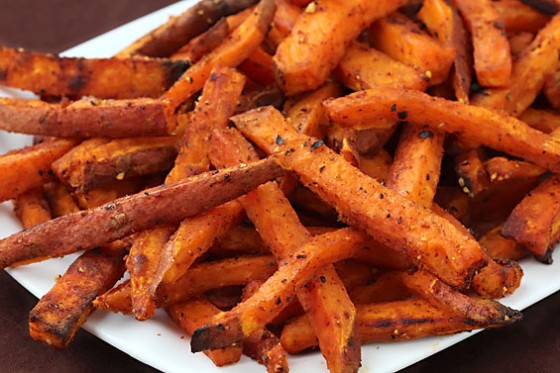 When we sat down for dinner, I assumed it was going to be a dinner just alike any other. Turns out it would be a dinner like no other.

Rex isn’t a particularly picky eater. He tends to eat whatever we put in front of him. Partly because of his taste buds. And partly because he knows that if he doesn’t eat the dinner my wife and I made, we’re not making him anything else.

This particular night, we were having sweet potato fries as a side. We’d sliced fresh sweet potatoes, drizzled them with olive oil, sprinkled with sea salt, and roasted them in the oven. The sweet aroma weaved its way through the house.

When we sat down to eat, Rex ate his meat, but didn’t want to eat the fries. I told him that he needed to eat at least a few of them. So he pushed them around on his plate, wrongly thinking I’d believe he’d eaten them. “I don’t like orange fries,” he said.

Then I saw it happening, but I didn’t believe it. I thought he was faking it, because he’d done it before, trying one more time to get out of eating the sweet potato fries. He started retching a little, talking between heaves: “I really don’t like orange fries.”

“Buddy, you’re going to eat 4 before you leave this table.”

Then it happened. At the exact moment I’d decided to get on his level and remind him that he’s not getting anything else for dinner…no dessert…no…and I never finished that last sentence before I saw his supper again. He cried. And I wanted to.

I gently wiped his face and hands, and helped him change out of his clothes. I took his plate to the sink, and told him we’d probably had enough dinner tonight. Me, included.

Then I wiped my face off. My mouth out. My hands off. And I put on a fresh change of clothes, too.

That moment reminded how much Jesus loves me. He loves me enough to take on the mess of my sin. To bear it for me. Because even my best is like a “filthy rag.” (Isaiah 64:6)

He loves me enough to take on the shame of my sin. To look foolish so I don’t eternally have to. (Tweet that)

Every time I’m short with my son I’m reminded again of my stench.

Every time my pride rears it’s ugly head I’m given another glimpse into the dense layers of grace God offers us in Jesus. (Tweet that)

Every time I just care about myself, ignoring the needs of others, I see my stink one more time. Because Jesus doesn’t ignore me. (Tweet that)

Even when I commit the same stupid sin. Again.

Even when I’m less than the husband I should be. Again.

Every time I wallow in my guilt and shame, Jesus comes along and gently wipes my face off. Takes my plate to the sink. And gets me a new change of clothes. He sends me to the living room and says, “It’s ok. That’s enough for tonight. You’re all clean now.”

Once again He affirms His love for me. His love never fails. (Psalm 136:1)

9 Statements that will Destroy your Small Group

The Gospel doesn’t change. The way we share it should.