When I was in graduate school, I worked at a coffee shop.

My all-time favorite hand-crafted masterpiece was the con panna. 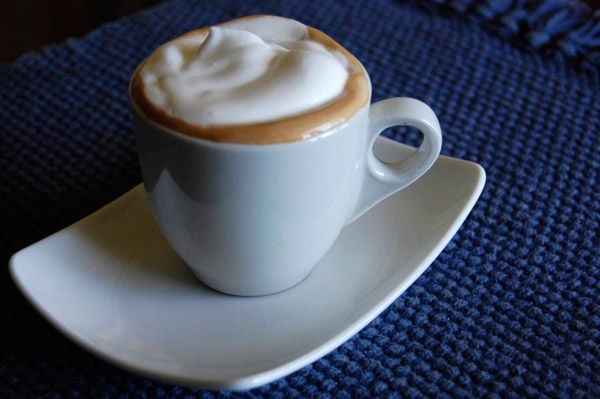 Con Panna means “with cream,” and it’s a simple drink to make.  Grab a canister of whip cream.  Then pull 2 (or, if you’re feeling extra frisky, make it 3) shots of espresso.  As soon as the shots are done brewing, transfer the shots to your demitasse cup, then top with whip cream.  It’s heaven. In a cup.

Most coffee shops, though, won’t have this drink listed on the menu.  They’ll have the traditional cappuccinos, lattes, and cafe mochas.  But no con panna.  And it’s not that they don’t know how to make it.  It’s just not a huge seller in America.  Most people in America want something with a little less kick…a little smoother and creamier.  They’re not looking for something with so much punch.

But if you want to be super cool, just order a con panna next time you’re at your local coffee shop. The barista will look at you with eyes that say, (*read the following with an Italian gangster accent)

How do you know about the con panna?

Then you’ll look back with eyes that say,

Hey! I know my stuff!

To which his eyes will respond,

A’right. A’right. I didn’t know. I’ll give ya a little respect.

To which your eyes will respond,

Don’t mess it up. I might mess you up.

I’ve shared the beauty of this drink with a lot of folks who frequent coffee shops.  You know what every one of them tells me?  “I am going to order that drink next time I go!”  Why?

There’s something about us that wants to feel like we have a leg-up on others.  That we’re a step ahead.  We know a bit more.  We are in a bit deeper.  We’re just a little bit more awesome than the rest of the people in this coffee shop.

You might spin that thought and think that it’s related to pride.  But I don’t think it is.  I think it’s a reflection of our desire to learn, grow, change, and improve.  And when it comes to leading people, this is an invaluable quality to overlook.

In leading people, help them feel like they’re insiders.

The more knowledge you give people, the more valued they feel.

The more knowledge you give people, the more they feel like a vital part of the organization.

The more knowledge you give people, the more they will give of themselves.

The more knowledge you give people, the better results your entire team will experience.

Have you ever had a con panna?  Do you even like coffee?

Why I chose to be ordained

The art of the spoken word