Pastors: keep your “gray” areas off the stage

I was visiting a church recently (which I encourage anyone on a church staff to do periodically…you’ll learn so much), and I got called out from stage.

I was minding my own business, when the theological hammer came crashing down on my head.

Let me state this first: I’m a pro-Bible guy. I’m for it. I read it. I glean wisdom and life from it. I’m convinced that it’s the very Word of God.

But I’m not convinced that it has to be printed on a page to be the Bible. 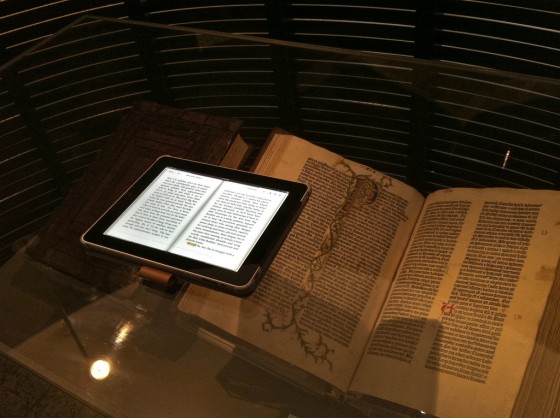 The service started out like 99% of every other service in America…a few songs, announcements, prayer, another song, then the sermon.

Here’s how it started, “Please get out your Bibles and turn to ______. If you don’t have your Bible, we have them available at the back…”

Normal, right? Nothing odd yet.

“And when I say Bible, I don’t mean your iPhone or your iPad or your digital device. I mean your physical Bible.” (he was shaking his Bible high in the air by now) He was peering over his invisible reading glasses…right at me and my iPad.

“THIS (he holds his Bible higher and shakes it more ferociously) is how Jesus had his. I think that’s good enough for us, too.”

I wanted to say, “Well, actually, Jesus opened the scroll in the temple, and it didn’t look like that neat, leather-bound, small book you’ve got above your head…” but I didn’t. At least not out loud. 🙂

I looked around me, to the people sitting close by. I was the only one with a digi-Bible.

Uh oh. I knew I was in for a long service.

There’s nothing wrong with holding convictions about gray areas. Things like watching TV, sending your kids to public school, listening to secular music, or drinking alcohol.

Scripture doesn’t say anything specific about any of these actions. It neither forbids nor condones these actions. Scripture may speak in principles, and how we should operate with respect to our freedoms, but with each of these areas, it’s relatively silent. (to these areas, I’d counsel someone to chase hard after wisdom.)

Turns out that the Bible also doesn’t say that, for a “Bible” to be legitimate, it has to be in print form.

Does God’s Word cease to be God’s Word when it’s on a digital screen? When it’s spoken aloud? When it’s written on a banner at a ball game?

Pastor: when you hold up “gray” areas as if they’re black-and-white, right-or-wrong issues, you needlessly alienate people.

The offense of the Gospel

But don’t offend them over what type of media they use to access God’s Word.

Don’t raise gray issues to the level of black-and-white. When you do, you’re speaking authoritatively where God has chosen to be silent. Which is not ground on which I want to find myself.

Have you ever heard a pastor speak authoritatively on “gray” issues?

10 Things to Do When You Get Tired in Church