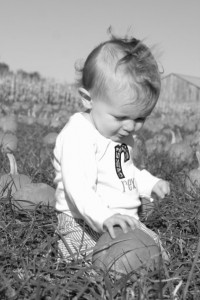 My son had his first birthday yesterday.  I can’t believe how quickly this year has flown!  I’ve learned a lot about parenting, about children, about faith, and about myself.

Anne Jackson, at a breakout session at the recent Catalyst Conference in Atlanta, said that it’s dangerous to blog about difficulties that you’re in the middle of.  It’s good to be open and honest about your struggles, but she wisely pointed out that it’s better to write about issues which you’re already having victory over.  I agree with this.  Which is why it makes it so dangerous for me to write on parenting…I’m right in the middle of it!

So, knowing that it’s dangerous for me to write about parenting, I’ll limit it to this first year:

9 Truths I’ve learned through my first year of parenting:

What did you learn/are still learning from your first year of parenting?

Time with the Lord