Two easy ways to be a terrible leader 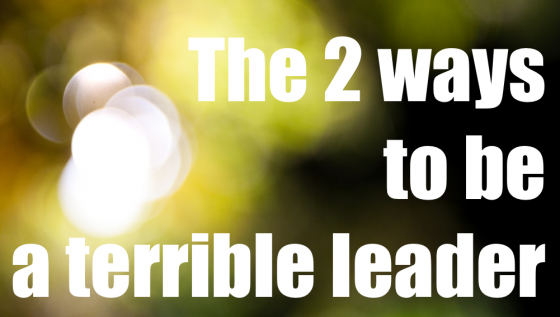 There are all kinds of things that people say leadership is. Ways they sum it up. Retweetable quotes. Instagram-inspired sunset-in-the-background-laden thick-fonted quotes. Ones that make you go, “Wow…that’s good.”

In other words, good leaders make both good decisions and bad decisions. And so do bad leaders.

So what is it that distinguishes a good leader from a bad one? (let’s not talk about character issues here…that’s another issue for another day)

It’s true that good decisions will earn you more respect, and help push the ball forward faster, than bad decisions will. But there’s a factor in making decisions that, if overlooked, will leave you taking a walk in the park rather than leading people.

What separates a good leader from a bad one? Relationships. (Tweet that)

Leadership is a relationship between those desiring to lead…and those who have the choice to follow or not.

And it’s not just about being chummy with everyone you lead. Relationships are vital in two different ways, and they parallel how to be a terrible leader. They also happen to correspond with two different animals. 🙂

The 2 ways to be a terrible leader

Rabbits never stay around to fight. At least not the rabbits I’ve run in to. When I get within 5 feet of them, they tuck their little cotton tail and hop away. They let other people do the fighting…they do the running.

As a leader, this looks like building leadership relationships purely on friendship, and making no decisions. Landing on nothing. Letting everyone else make the decisions for you. Putting your head down and running away. Assume everyone else wants to eat you, make no decisions, and lead out of fear. (Tweet that)

Bulls don’t just stay around and fight. They don’t consult the other cows, either. They just charge.

In leadership, this looks like putting your head down and charging through everything. Assuming leadership relationships are purely top-down in-charge with no-respect for others’ gifts, time, talents, or other responsibilities. Put your head down, stomp your hoof in the dirt, and charge. (Tweet that)

But there’s a better way.

Leading with others in mind.

Leading with others in mind means you value collaboration. You value others’ gifts. Passions. Responsibilities. You allow people to use their expertise. You know you aren’t always be the smartest person in the room. You lean on others, because you weren’t created to be all things. God hasn’t gifted you with everything.

Leading with others in mind also means you value making decisions collectively, but you know you are the one on whom the buck falls. You take responsibility, make a decision, and move forward. (Tweet that) You know that, though you’re not the smartest, you must make a decision. You are the leader. You must move things forward. You don’t lead out of fear.

The book of Proverbs sums it up well.
Walk straight. Consult others. And give an apt answer.

Folly is a joy to him who lacks sense,
but a man of understanding walks straight ahead.
Without counsel plans fail,
but with many advisers they succeed.
To make an apt answer is a joy to a man,
and a word in season, how good it is!

The 4 Invaluable Laws of Leading Volunteers

9 Statements that will Destroy your Small Group