Tiger Shanks it in the Woods

I recently wrote a sports editorial piece for a local paper here in middle Tennessee, the I-24 Exchange.  For your convenience, I thought I’d re-post it here on my blog, though you can also find it HERE.  Keep in mind…this was written last Thursday, before the news of Tiger’s indefinite leave from the game of golf.

Tiger Shanks it in the Woods 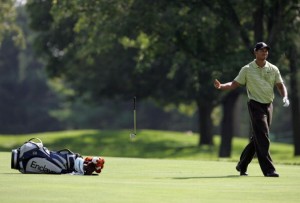 Unless you live in a hole, you’ve heard the news about “the greatest golfer of all time.”  Tiger Woods was taken to the hospital for an accident he had in his SUV just outside of his Ocoee, FL, home, at 2:25 AM on Friday, December 2nd (momma always said that nothing good happens after midnight).

It was suspected that Tiger was driving under the influence that night.  Rumors of marital troubles between he and his wife, Elin, only led to confirmation of years of infidelity on Tiger’s part. Elin, at this point seems to be sticking around…for the kids.  His sponsors are sticking with him (though who knows for how long).

Why are we as a society drawn to stories where people’s lives seem to be spiraling into an absolute dumpster fire?  Maybe it helps us to feel better about our own life. Maybe we see ourselves somewhere in the story.  Maybe it’s because we have a morbid fascination with the failure of others. Maybe we’re just thankful it’s not us.

Tiger messed up.  But so have I.  And so have you.  None of us have lived a life immune from bad decisions and moral failures.  Tiger, on his website, says, “I have not been true to my values and the behavior my family deserves. I am not without faults and I am far short of perfect.”  You may, or may not, have cheated on your spouse, but you’re not perfect either.  I’d venture to guess that, at least one point in your life, you’ve been in need of someone’s forgiveness.  You were guilty, and there was no denying it.

There’s hardly a greater feeling in life than being forgiven.  To be granted a fresh start.  To have your slate wiped clean.   It’s as if a heavy, unbearable burden has been lifted off of you.

Is Tiger’s career over?  Is he going to be counted as “the greatest golfer of all time?”  Or has this exposure marred his fame and fortune forever?  Only time can tell.

But instead of our eyes and hearts that are quick to judge, and quick to thirst for more and more dirt, maybe we would be better off extending grace and forgiveness.  Tiger doesn’t deserve that.  But by very definition grace is not deserved.  It is not earned.  It’s granted by the one who has been wronged.

I vote to give him a second chance.  And I’m thankful that others have done the same for me.

Coca Cola and the Gospel