A trick that the best leaders do

It was the last inning of the final game of the 14-year-old travel team tournament I was playing in. We were in Murray, KY, squaring off against the home town heroes. The two guys in front of me struck out looking, frozen by the ace that the other team had brought in to close out the tournament.

I remember the look from my coach as I walked up to the plate with two outs. The look that said, “Dang it. Reed is up. I guess this tournament is over for us.” That look just made me mad. So mad that I whiffed on the first two heaters he painted on the outside corner. 0-2 count. Nobody knew it right then, not even the pitcher, but I had this guy’s number. I had him dialed in. He came in on me with a low fastball, and when he did, it was like the whole world slowed down for a moment. I felt like I could see the ball like I’d never seen it before. Instead of throwing me a heater on the inside corner, it was like he was lobbing me a softball. The buzz of the crowd went away, the fielders disappeared, and it was just me and the ball. It was like I was in the matrix for a moment. I turned on it, ripping it to the left field wall, knocking in the tying run.

Boom. Take that, coach. And other team.

Have you ever had those kinds of moments, where everything around you is going crazy, but you are so laser focused that time seems to slow? 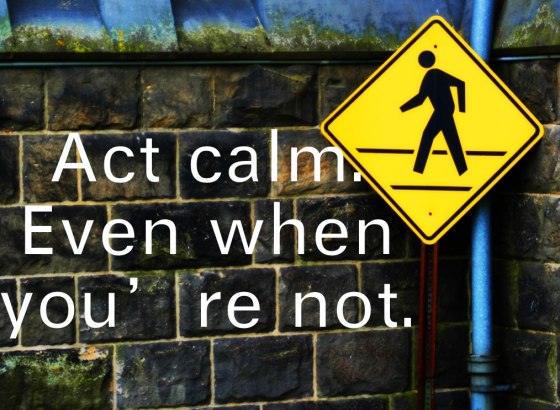 The best leaders work like that, navigating stressful and crushing situations with ease. They have a calming sense about them, too, bringing other people into their zone and helping them calm down.

Helping confusion seem like an evening in the recliner.

Here is the reality: even in these “zone” moments, things aren’t calm. They aren’t clear. But great leaders help others feel that way, as they constantly, through their words and actions in the heat of the moment, cast the vision that says,

“We’re going to be just fine. Hang on. Here’s where we’re going.”

They paint a picture that isn’t satisfied with the reality in front of them, but is looking forward to that day when things will be calm.

Ron Edmondson is especially adept at this. I can’t tell you how many times I stepped into his office at Grace, stressed and confused, only to walk out thinking, “Why in the world did I ever doubt?”

Here’s the trick that the best leaders do:

Even if you aren’t. Even if you don’t know which direction you should go next. Even if you are frustrated, up-tight, and confused. Take a deep breath, and help others to do the same. If you lose your cool complaining and crying, you only exacerbate an already stress-inducing environment.

As the old adage goes, fake it until you make it.

Or maybe your words and actions can be deeply rooted in a faith that trusts that no matter what happens, God’s not shaken. God’s in control. He calls the shots, not us. And even if we fail, God works out all things for our good. Stress tends to bring out the best, and the worst, in people. Let it bring out your deep trust in a good King.

Next time chaos and confusion strikes a meeting, an event, or a relationship, act calm. Remind people who’s really in control. Take a deep breath. And move forward.

In this room, The Quiet is victorious.

It’s heavy and loud and visible.

as once again the conquerer is

The room hangs on every breath.

and for a brief moment hearts grasp for life.

The exchange of slow breaths for open eyes

quickly give way, yielding to

Gaining strength with every vacuous breath,

One force dominates through stress,

Growing stronger with every moment:

Until The Quiet loses ground.

Hope bursts forth as life slips

and tears sprout a tension of joy and

The battle is over.