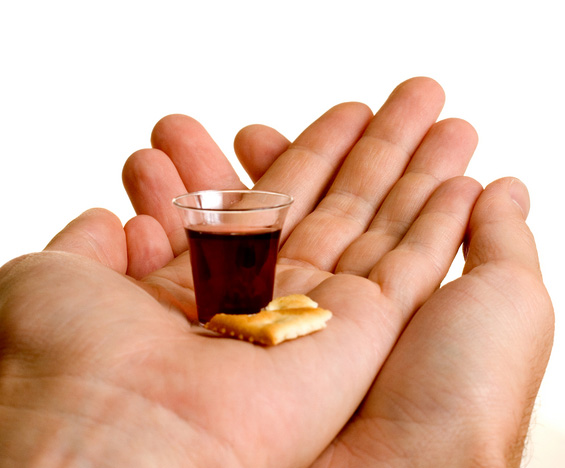 Eating the equivalent of a savory version of Listerine Breath Strip and drinking half of an espresso shot of wine (or grape juice, for us Baptists) is a huge deal in the Church today.

For whenever you eat this bread and drink this cup, you proclaim the Lord’s death until he comes. (1 Corinthians 11:26)

The weight a local church places on communion (a.k.a., the Lord’s Supper, the Eucharist), the frequency it’s practiced, who administers it, how it is administered, whether it’s fresh bread or stale, the effect (or affect…I never know which to use) it has on a person’s life (the removal of sin, a dispensation of grace, a memorialization, etc.), what happens in the bread and wine (does it change from its visible form to the actual body and blood of Christ?), among other debates points to the significance of this symbolic post-breakfast, incredibly light and untasty, snack.

One thing I’m working through at Grace is the idea of small groups holding communion with their group.  I know that many people will throw up red flags at the very thought of communion happening outside of the walls of a church building, administered by someone not on a church staff.  But hear me out.

It seems to make sense for a few reasons.

Why it makes sense to encourage communion in small groups:

1. It’s difficult to do on Sunday mornings because of the way our theater is set up.  Holding services in a school has its limitations, and the logistics of pulling off the Lord’s Supper is a difficult one.  We’ve tried many different ways, and to be honest, none has worked exceedingly well.

2. It doesn’t feel intimate.  It loses its relational edge in a Sunday morning gathering environment.

3. Our services are 1 hour long.  In order to do communion “right” (giving it its proper place, explaining its significance, giving people space to process, celebrating, etc.), it takes some time.  And in a 1 hour service, either everything is rushed or various parts are cut out, neither of which is desirable.  Small groups afford much more time.

4. We don’t hold communion with great frequency.  Why not?  See above reasons.

5. We ask our small group leaders to act as shepherd leaders.  It makes great sense for them to administer this with their groups.

6. Life change is happening at the small group level.  One beautiful way of acknowledging and celebrating the change that Christ is making, and has made, in a person’s life, is through celebrating the death, burial, and resurrection (communion) together.

7. Small groups can practice communion as often as they would like.

8. The relational aspect of the Lord’s Supper can really happen in a small group environment.  In a large group setting (Sunday mornings), often the relational side of communing together just can’t happen.

Some concerns that will be brought up:

2. In a small group, it’s outside of the direct oversight of the church leadership/elders.

3. It could get really messy really quickly.  If you have small group leaders who don’t know what they’re doing, they could wrongly administer the Lord’s Supper. (see 1 Corinthians 11:27-32)

What do you think?  Is it right (and good) for small groups to administer the Lord’s Supper?  Or is a dangerous, non-biblical slope you’re not willing to go down?