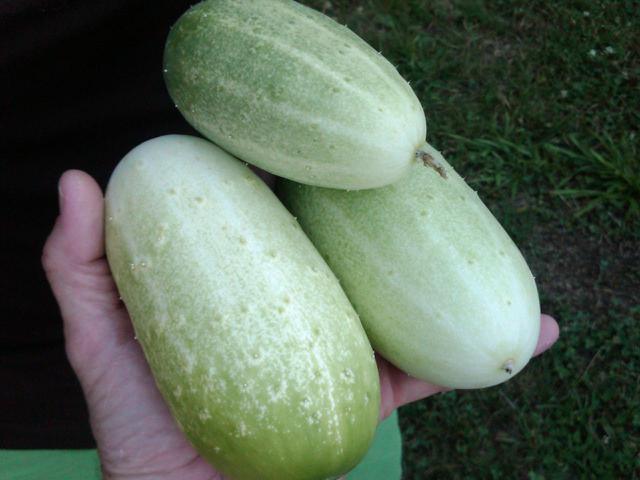 Did you know that as soon as you pull the fruit off of the vine, it begins to die? Looking at these cucumbers above, you’d think they were healthy, right?  They’re green.  They’re huge.  They’ve got the little prickly things on them.  All evidence points to them being as healthy as any other cucumber.  But notice the stem.  It’s been pulled off of the vine.

Whether we pickle them or put them in a salad, these cucumbers are going to taste fantastic.  They look fine and taste fine…at least for the time being.  Wait a week, though, and they’ll look and taste dead.  Nobody would eat them at that point.  But for now, they look fine.

Since they’ve been removed from the life-giving vine, though, they’re dying.  That process can be slowed by putting them in the refrigerator.  Or even pickling them.  But there’s no doubt that, over time, they’ll be completely dead and shriveled up.  Though it’s not visible or tastable now, these cucumbers are dying because they have nothing that’s giving them life.

“I just feel like I’m not where I once was spiritually.”

Ever uttered those words?  Ever felt like you’re just not as close to Christ as you once were?

The reason you felt like it crept up on you out of nowhere is the same reason that the cucumber looks fine immediately after taking it from the vine.

It takes a while for it to look and taste dead.

I am the true vine, and my Father is the gardener. He cuts off every branch in me that bears no fruit, while every branch that does bear fruit he prunes so that it will be even more fruitful. You are already clean because of the word I have spoken to you. Remain in me, and I will remain in you. No branch can bear fruit by itself; it must remain in the vine. Neither can you bear fruit unless you remain in me.I am the vine; you are the branches. If a man remains in me and I in him, he will bear much fruit; apart from me you can do nothing. If anyone does not remain in me, he is like a branch that is thrown away and withers; such branches are picked up, thrown into the fire and burned. If you remain in me and my words remain in you, ask whatever you wish, and it will be given you. This is to my Father’s glory, that you bear much fruit, showing yourselves to be my disciples.  -John 15:4-8

The Good News is that you can be grafted right back into that vine (Christ)!  The death process doesn’t have to continue.  It can end right now if you just ask (Matthew 7:7)

Have you removed yourself from the vine?  When did you realize you weren’t connected?

How have you personally plugged back into the vine? What did you do that connected you back with Christ?