What pastors really mean when they say…

We pastors say a lot. Most of the time, we’re straight shooters.

At least as far as you can tell. 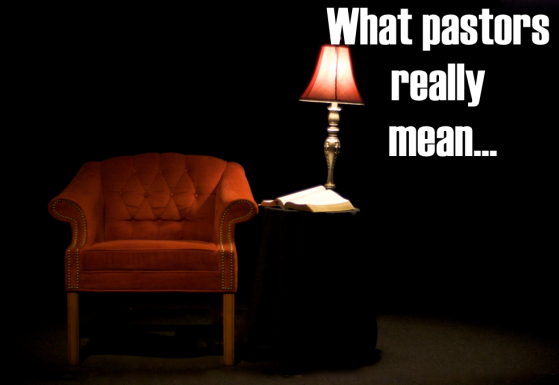 Sometimes, though, we don’t really mean what we say. It’s not that we’re speaking an outright lie. There are just subtle, slightly different interpretations that one might make of our words. We’re like a good exercise in hermeneutics…be careful the first time you try to read us. Read us in our grammatico-historical context and it’ll all make sense. Speed-read through an interaction and you miss the fuller context.

Don’t be offended here. Not all pastors mean these things every time. Give us some grace. Allow us the space to love on and minister to our family first. And for crying out loud, quit thinking that paid staff are the only ones to whom the Great Commission was given!

We say: You emailed me? It must have gotten lost in the digital mail.

We mean: I read that thing three days ago. Forgot to respond.

We say: My evenings are booked solid this week.

We mean: I value my family time. Find a way to meet during normal business hours.

We say: Instead of meeting with me, could you meet with one of our small group leaders?

We mean: I’m not the only pastor here!

We say: That’s a great question about amillennialism. What do you think?

We mean: I haven’t thought about that stuff since seminary…help me please, Wayne Grudem!

We say: Your kid is so cute!

We mean: I love you and your kid, but goodness that kid is not cute… (don’t get offended…if your kid isn’t cute, you know it)

We say: If you want to grow in your faith, you should join a small group.

We mean: If you want to grow in your faith, you should join a small group.

We say: Have you thought about serving?

We mean: Get off your lazy rear end and do something!

We say: I won’t meet with members of the opposite sex alone in private or in public over a meal.

We mean: I value my marriage more than I value meeting with you alone.

Ever heard a pastor say one thing and wonder if they really meant something else?

10 Tricks to Getting Your Emails Read 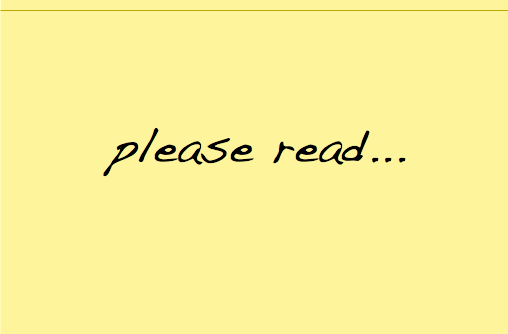 If you want none of your emails read, read my post HERE. But, since you’re reading this post, my guess is that you would prefer an increasing amount of your virtual letters to be read and acted upon. Am I right?

Whether you like it or not, you’ve got to send emails.

On a daily basis, I’m sending and receiving hundreds of emails. And when I send an email I hope it gets read. I spend time crafting exactly what I want to say. I take out the extraneous. I boil it down to the essentials. And I hit “send.”

If you put time into an email, you expect people to read it too, right?

10 Tricks to getting your Emails Read

Bold the things you want read. Understand that every word won’t be read. By “bolding” the important words, you ensure that they’ll be read.

Start your email with the most important things. Again, assume people won’t read ever word.

Leave an action statement at the bottom. Many times, people will read the first few sentences and the last few. Make sure you catch them before they hit “delete.”

Break your email into two sections: short and long. Be explicit with what you’re doing. In the “short” section, just give bullet points. No explanations, just the facts. In the “long” section, elaborate on each point a little bit, giving people more details if they want to read more.

Include your main point in the subject line.

Include an action step in the subject line. This may not guarantee that your email will be read, but it will ensure that what you want done because of the email gets done.

Use numbered lists. People are more likely to read your email if they know that there are only __ points in it. Lists are magical.

Less is more. Keep your emails under 250 words. Anything more deserves a phone call. Or a cup of coffee. Or both.

Never FWD junk email. Never. It breaks trust rather than building it.

20 Ways to ensure your email never gets read

To almost everyone who has ever used email,

I’ve read your emails. One too many times.

They’ve cluttered my inbox. Wasted my time. And asked me to do something I didn’t want to do. (I never wanted to forward this email to my 10 friends, and I’m pretty sure Jesus isn’t upset with me for not.)

If you want to keep ensuring that I don’t read your emails, please note the following whenever you send an email.

20 Ways to Ensure Your Email Never Gets Read

If you want your email to never be read, do any or all of the above.

What’s the standard response time for responding to an email?

I try to respond to all emails within 24 hours. Sometimes on the weekends, things can pile up and it takes a bit longer than 24 hours, but I try.

But I don’t know what’s standard.

Is there a standard for email responsiveness/promptness?

If you know you’re going to take longer than your standard, do you put up an “away” message alerting people it may be a bit longer?

What do you go by? What time frame do you shoot for?

Is there a different standard for your work email than for your personal email?

Do you respond more promptly for social media interaction than email?

Does your promptness (or lack thereof) reflect something about you?

Pick one of the questions above and help me out.   Wrestle through this with me! 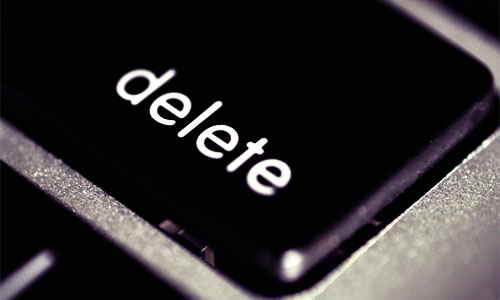 How to get your inbox to Zero in 1 click

Michael Hyatt has some great suggestions for staying on top of your email HERE.

But personally, my way is much faster, cleaner, and lets you get on with the rest of your day before 8:05.

How to get your email inbox to zero in 1 click:

The end of email? 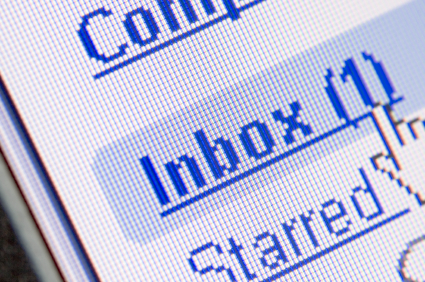 I’m a small groups pastor, and the major way I communicate with small group leaders outside of Sunday morning is via email.  I’d love to be able to have coffee with all of them regularly (because they’re some of my favorite people), but it’s just not possible.  With the fast-paced nature of our society, and our group leaders in particular, combined with my own personally busy schedule, the ability to communicate important information to multiple people at once is essential.

When I communicate via email, much of the information I send out is never read.  In fact, one of the guys on staff (who will remain unnamed) told me that if my email is more than one line long, he won’t read it!  I could get upset about this, take it personally, and require group leaders to read the weekly (though it’s more like bi-weekly) emails.  But you and I both know that that approach would not lead to increased reading and response to this important information.

I’ve tried vastly shortening my emails.  Now, instead of a devotion before the “important” stuff, I start with “Here are the vitals you and your group need to know…”  I give them a list of a few major things, and that’s it.  But still, the emails are not being read.  Why?

Why my emails (and yours) aren’t being read:

1. Their inbox is already full of other important information.  My email is 1 of 1000 that they “have” to read.

2. It takes thought to read emails.  Reading my emails is not always mindless, because they need to read and process the information for their group.

3. My emails are boring.  Since I’ve pared them down to only vital information, they’re pretty boring.  Concise? Yes.  Thrilling? Not even by a long shot.

So are we seeing the end of email?  Maybe.  Email is boring and lifeless.  It’s often filled with spam, and forwards that we don’t want to read.  We get mass emails and “reply all” messages that don’t pertain to us, and our inbox rarely reaches zero.  The rest of the world has taken massive leaps forward in terms of communicating, yet email still seems to lag behind in black & white letters and numbers.

I’ve begun utilizing Twitter and Facebook to communicate with my team.  Both of these platforms integrate networking with information sharing.  Communication moves from the mere passing of information into the realm of knowing somebody better.  I put a face with a name in Facebook.  I get a snapshot of a person’s life (at least what they want the public world to see) in Twitter.  That’s where lots of the group leaders at Grace Community Church “hang out,” so that’s where I’m going to communicate.

I have recently begun using The Flip video camera.  I’ve really liked the ease of use, because I can throw it in my bag and have it ready to catch the many things that my wife and I don’t want to miss our son doing.  In addition to family videos, I’ve begun using it to shoot some videos for our small groups.  I have a lower quality version, but there are even some new, HD models of the Flip available.  At the end of the day, I’d sacrifice video quality for ease of use.  Based on the response of my small group leaders, they’d much prefer watching me yack on a video than reading it.

Is email dead?  I think it’s being quickly outpaced by lots of other mediums.

How do you communicate?  What medium to you prefer?  Maybe, more importantly, which mediums do “your people” prefer?

Here’s the video I sent to my small group leaders.  It’s not the best video you’ve ever seen, but I know that more people watched it than normally read my emails:

Automatic delivery of Life and Theology

I just wanted to make you aware of a few different ways you can receive Life and Theology.

If your preferred method of reading the content on this site is by visiting the site directly, then feel free to keep doing that!

If you would like to have this blog delivered to you automatically, after it is published online, and not have to check the site to see if new content has been added, I’ve offered a couple of different methods below:

If you prefer to use a RSS feed reader, such as Google reader, My Yahoo!, NewsGator, Bloglines, or any other “reader,” which links to the RSS feed (not sure what an RSS feed is?  Find out more here) of this site, click here.  Then, simply click on your preferred reader.

If you prefer to have Life and Theology delivered directly to your email inbox, click here.  You will be prompted to enter your email address, then respond to the verification code that is sent to your inbox.

Thanks for following the blog.  I hope that the content continues to be relevant for you and helps you to grow in your faith.